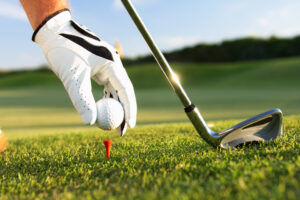 Randal came in to gain confidence in public speaking for an upcoming speech. He was a 50-year-old man who struggled with shyness all his life and felt that his relationship to life was too timid. At his third session, Randal told me that besides his increased confidence, he had taken ten strokes off his golf game as well.

His motivation to come in for hypnosis therapy came from his fear of public speaking. He was being given the task to give a presentation at work to his bosses and peers. From the moment he would be aware of having to speak in public in any way, Randal experienced a high level of anxiety that affected his sleep and made his otherwise ordered life miserable.

Together we came up with a plan of three sessions with a specific focus for each session. Our first goal was to stop the anticipatory anxiety and regain his sleep. Along with the reprogramming, I included a post-hypnotic signal.

Signal hypnosis gives the client a tool to use in the moment to shift out of negative reactions as they are occurring. A signal can be a word or phrase, an image to hold in your mind or a body signal such as tapping the knee or pulling an earlobe. It is decided on ahead of time by the client and then programmed in during the session.

This signal can be used whenever needed. In Randal’s case, it was to help stop anxious anticipatory thinking and calm him. Its function was to move him out of the flight or fight response to a relaxation response. A signal is a direct link to the subconscious. As soon as it is used, the subconscious responds according to the programming attached to it.

Our sessions were planned ten days apart. When Randal came in for his second session, he was happy to report that for the most part the anxiety was gone and he was sleeping well. He found his signal (pulling on his right earlobe three times) to be effective in shifting him out of anxiety if it came up.

Our next goal was to work on building confidence in all his interactions with other people, especially with groups. We focused on speaking to people on general, being relaxed, being comfortable and calm. One of the key messages we worked with was to turn around being self-conscious to being curious and interested in other people. When you feel fearful about a situation, you are focusing on how dangerous the situation could become. It’s called projecting your inner anxiety onto the unknown future.

It is important to be present-moment oriented and in touch with your ability to respond to a situation rather than reacting according to an automatic anxiety response. Anxiety is compounded by the fact that your brain chemistry is producing stress chemicals called fight or flight response; the brain is not responding to reason or logic.

In Randal’s case that was very disconcerting for an engineer who understands logic and reason and order. Finally getting a handle on his anxiety was very important and inspiring for him. He now felt confident that he could accomplish his other goals.

During his second hypnosis session, I laid out a blueprint in his subconscious, setting a context of “confident with people and life in general.” I suggested that he had the ability to cope with life, that he could be who he wanted to be, and live the way he wanted to live. I focused only on the broader concept, not the upcoming speech.

At his third and final session, I saw a different man walk into my office. Randal’s body language was confident. He was relaxed and joking with me. During our check-in he said, “I don’t know if this is relevant but in the past ten days I have taken ten strokes off my golf game.” Needless to say he was very pleased. We discussed how this was a positive response to our new blueprint. He also reported a better comfort level in interacting on a casual basis with a group of colleagues who went for coffee together. He said he had no problem now interacting with the casual banter. But he did feel that his comfort zone was limited to short phrases or sentences. He was yet to feel comfortable telling a story.

In our third session, I reinforced the previous session’s messages. The primary focus for this last session was to be on the upcoming speech and how he wanted it to go. He asked me to include the suggestion that the sight of groups of people would be calming for him. The fact that he had thought about this and decided on this particular message was encouraging. This meant that Randal was fully participating in this transformation and actively thinking about how he wanted to change.

Randal phoned me after his speech and reported that he was quite calm and composed and it went off very well. He was also calmer around groups of people and improving more each time he interacted with people in general, which was one of the suggestions I gave him.